It’s Girl Scout cookie season, which means our wallets are getting smaller and our pant sizes are getting bigger.

Seasons vary by place. Here’s how to find yours.

But in these hip modern times, how can you get your Thin Mint fix if you don’t carry cash?

According to a 2014 report by Bankrate and Princeton Survey Research Associates International, 50% of Americans carry $20 or less every day, and 9% don’t carry cash at all. Retailers are adapting at varying speeds.

The Scouts know this is a problem, though, and they’re trying something new: mobile credit card readers.

That’s right. Some Girl Scouts have started using Square to take payments, and people around the country have taken notice.

Square doesn’t have any official data on the prevalence of its readers among the Scouts, and Troop 87 didn’t respond to requests for comment about why they decided to try the mobile card readers.

Square did say it has seen a trend of more parents telling the company they’ve started using readers, as well as more social media chatter about scouts around the country using them in 2017 than in 2016.

The readers didn’t come from an official Girl Scout partnership with Square, and there probably won’t be one in the future.

Square was excited about the scouts, though: “We love when sellers use Square in creative ways. As you can imagine, their customers are equally as excited that they don’t have to carry cash anymore.”

There’s an expense for the convenience, though: the company takes a 2.75% transaction fee for all credit and debit card transactions.

Who are these scouts of the future?

Meet Ava Burns. She’s a seven-year-old Girl Scout and is in the first grade in Austin, Texas. She’s sold 720 boxes of Girl Scout cookies this year, the most of anyone in Troop 87. 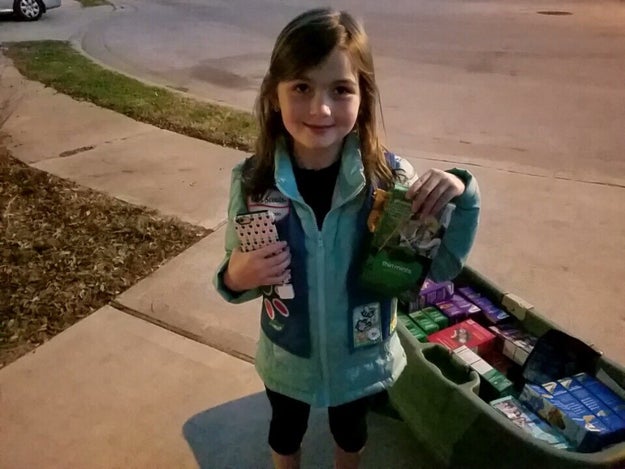 It’s only her second year in Girl Scouts, and last year she sold 500 boxes.

Her goal for 2017 was 650, which she’s obviously already beaten. Her mom, Briana Burns, attributes the increase to one big change: a Square credit card reader.

“I think 90% of the people who weren’t carrying cash, which were mostly young people, turned around and bought something when they heard we took credit cards,” she told BuzzFeed News. 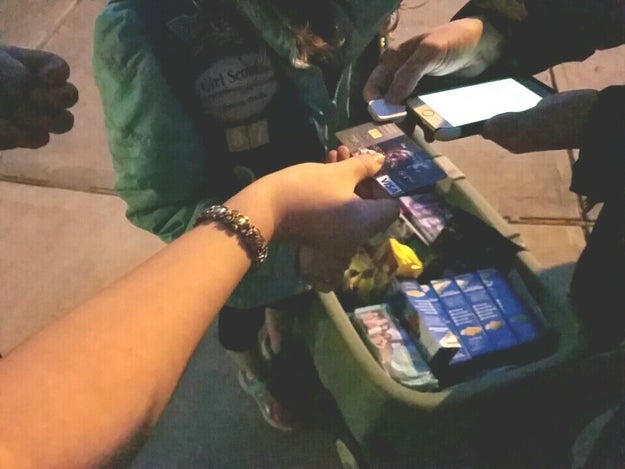 Last year, Ava and her mom had some trouble. Several potential cookie buyers walked away empty-handed, saying, “Ah, I want to buy some, but I don’t have any cash.”

The same thing started happening when cookie season started again on January 18 this year. But two days into the season, Troop 87 offered its members the chance to use Square readers to process payments for cookies. Ava wanted to try it out, so she brought the reader with her when she was selling door-to-door after school and when setting up cookie sales booths at Walmart or Walgreens on weekends.

Sales end this Sunday, and Ava is currently the top seller in her troop. Briana said that the other scout with a Square reader is among the top three as well. Briana predicts more people will use the readers in 2018 because of how successful they were this year.

“Ava asked me last week if we had met our goal, and I looked, and we were already 70 boxes past it,” Briana said.

It wasn’t just Ava’s mom using the reader to take payments, either.

Ava herself became well-versed in using Square to take credit card payments. The two had set up shop outside a Walmart one day when Briana started having trouble getting the reader to scan a card — “They’re easy to use, but a bit touchy,” she said — when Ava snatched the iPhone and the reader with a quick “Ugh, mom, just let me do it,” and swiped the card herself.

“It really empowered her to see technology as a means to achieving her goals rather than a spare time thing,” Briana said. “She’s my little entrepreneur.”

The reader had other benefits, too.

The troop had instituted a two-box minimum for transactions using the Square reader, so all the customers who didn’t have cash had to buy more cookies by default. What a burden to have ~two~ boxes of Samoas instead of one.

It was also safer. After a successful day of sales, Girl Scouts can be carrying plenty of cash. In the California Bay Area this year, a Girl Scout and her mother were allegedly robbed at gunpoint for the cash they’d collected from cookie sales.

“Having the reader at the booths, especially when it’s just me and Ava, makes me feel like we’re less likely to be targeted because there’s less cash on hand. And we don’t have to run into Walmart to make change or go to the bank to deposit all this money,” Briana said.

On one of her Saturday shifts from 11-1 outside of a Walmart, Ava sold 130 boxes of cookies, beating even the iconic San Francisco Girl Scout Danielle Lei who set up shop outside of a marijuana dispensary in 2014 and sold 117 boxes in two hours.

Ava is hoping to use the rewards from her cookie sales to go to Girl Scout riding camp, as her mom did when she was a scout. Her favorite cookie is the Samoa, also known as the Caramel Delight. Briana’s is the S’More, the new cookie for 2017 that became one of this year’s top sellers.